Karlheinz Brandenburg to give talk "Perfect auditory illusion over loudspeakers and headphone: How to use the properties of the human ear and brain" 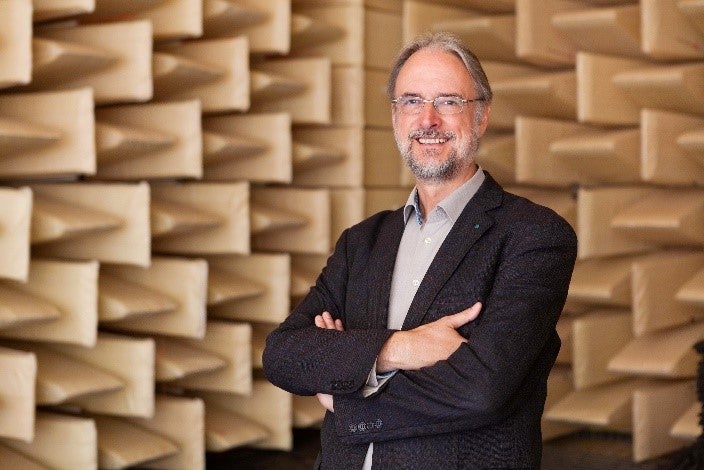 Monday October 21st, EMPAC, Studio Beta, 10 am
The talk will both touch on historic developments including .mp3 and AAC and new results especially regarding spatial hearing and how to get nearer to the dream of perfect recreation of sound. Karlheinz Brandenburg is the founding director of the Fraunhofer Institute for Digital Media Technology IDMT.

The dream of perfect recreation of sound has always consisted of two parts: Reproduction of monaural sounds such that they seem to be exact copies of an original signal and the plausible recreation of complex sound environments, the possibility to be immersed in sound. The latter goal seems to be much more difficult, especially if we consider reproduction over headphones.

The talk will both touch on historic developments including .mp3 and AAC and new results especially regarding spatial hearing and how to get nearer to the dream of perfect recreation of sound.

Modern music distribution systems largely depend on lossy audio coding. To include the properties of the human ear into the design of signal processing systems made it possible to get equal audio quality at much lower bit-rates.

The talk will briefly to into the basics of such systems.

However, our knowledge about human perception is far from complete. With tasks like the dream to reproduce spatial sound in a perfect way both over loudspeakers and over headphones, we have to acknowledge that our current models are either plainly wrong or at least not accurate enough.

The second part of the talk will present new results for headphone listening while trying to externalize the sound.

From standard two-channel sounds reproduced over headphones through artificial head recordings, the inclusion of HRTF and binaural room impulse responses , always something was missing to create a perfect auditory illusion. Depending on refinements like individually adapted HRTF etc. these methods work for many people, but not for everybody.

As we know now, in addition to the static, source and listener dependent modifications to headphone sound we need to pay attention to cognitive effects: The perceived presence of an acoustical room rendering changes depending on our expectations. Prominent context effects are for example acoustic divergence between the listening room and the synthesized scene, visibility of the listening room, and prior knowledge triggered by where we have been before. Furthermore, cognitive effects are mostly time variant which includes anticipation and assimilation processes caused by training and adaptation.

We present experiments proving some of these well-known contextual effects by investigating features like distance perception, externalization, and localization. These features are shifted by adaptation and training. Furthermore, we present some proposals how to get to a next level of fidelity in headphone listening. This includes the use of room simulation software and the adaptation of its auralization to different listening rooms by changing acoustical parameters.

Finally, we present some ideas how to use these research results in new devices for a Personalized Auditory Reality (PARty).

Prof. Dr.-Ing. Dr. rer. nat. h.c. mult., Chair of Electronic Media Technology at the Institute of Media Technology at the Technische Universität Ilmenau, director of the Institute for Media and Mobile Communications at the Technische Universität Ilmenau and founding director of the Fraunhofer Institute for Digital Media Technology IDMT, Brandenburg is an electrical engineer and mathematician who is a world-renowned figure in the fields of digital audio and computer science. His 1989 dissertation on audio coding and perceptual measurement techniques forms the basis of MP3 and AAC audio encoding schemes which have transformed the music industry.  Prior to joining the Fraunhofer Institute for Integrated Circuits in Erlangen as head of the Audio/Multimedia department in 1993, he worked with AT&T Bell Laboratories in Murray Hill, New Jersey, U.S. on ASPEC and MPEG-1 Layer 3. Since 2000, he has held the position of full professor at the Institute for Media Technology at Technical University of Ilmenau. He is a Fellow of both IEEE and the Audio Engineering Society, and is the recipient of awards so numerous that we present only a small fraction here: Internet Hall of Fame, IEEE Consumer Electronics Award, Cross of the Order of Merit of the Federal Republic of Germany, IEEE Engineering Excellence Award, and several awards from the Audio Engineering Society. He has been granted at least 27 US patents as a co-inventor. Current research interests include 3D-Audio, MIR (Music Information Retrieval) and Personalized Auditory Realities.